Portfolio > Kings of the Earth and Short Stories 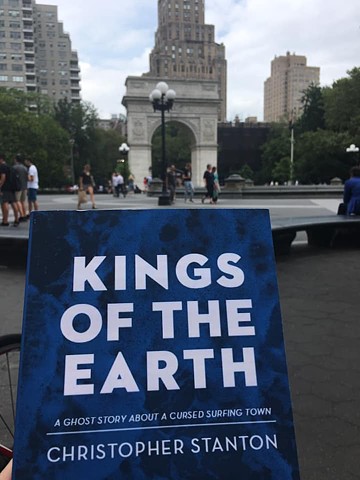 Kings of the Earth
< previous next >

The lonely Michigan surfing town of Great Water has a long history of inexplicable occurrences. A shocking double murder and suicide there in 1918 still draws tourists who want to see the house where Jack Spivey went mad. But that is only the best-known event in a long list of unsolved disappearances and peculiar events in this paranormal epicenter.

November 2000: Three people try to survive the weekend when a strange portal opens in the woods near Spivey Point, pulling unsuspecting people inside and letting ghosts roam free. Newly pregnant Jenny fights to find her beloved husband Lance after he vanishes without a trace. Teenage surfer Eric gets a letter from his long-departed father, then finds a vintage surfboard washed ashore, which plunges him into exploring his mysterious past. And Martin, a lonely security guard plagued by mental illness, struggles not to succumb to madness and violence.

These three desperate souls cross paths as they try to uncover the secrets of Great Water, where the border between the physical and spirit worlds is frighteningly blurred.

Kings of the Earth started as two short stories I wrote almost fifteen years ago.

One story, Security, was about a lonely mall security guard named Martin who finds a runaway hiding in a bathroom stall. The kid gets away, sending Martin into a guilty tailspin.

The other story, The Duke, was about that same runaway, a young teenager named Eric who idolizes surfing legend Duke Kahanamoku. Eric wants to escape the frigid Midwest winter and his bickering parents and find a new life on the other side of the country.

When I placed these two stories in a manuscript along with eight other stories and queried literary agents, the universal response was that short story collections are hard to sell if the writer hasn't already published a novel.

I took that to heart and created a third character, Jenny -- and decided that she, Eric and Martin would be the protagonists of my book.

Two of the filmmakers I idolize are Robert Altman and Paul Thomas Anderson. I wanted to create a novel set only over the course of a weekend, where my three main characters would cross paths at various points, as well as in the lives of supporting characters in the town. Everything woven together, like in Magnolia and Nashville!

Diving deeper, I'd had a longtime interest in horror and the paranormal, brought on by watching In Search Of as a little boy and renting horror films from the video store on the corner when I was a teenager. I also learned about the surfing scene on the Great Lakes -- not too far from where I grew up in Columbus -- and decided to create a novel set in the best surfing spot on Lake Michigan.

That town would be haunted, of course!

I'm so proud that Kings of the Earth has been nominated for the 2020 TopShelf Book Award -- and it has received nearly all five-star reader reviews on Amazon. (You can buy the book and read those reviews here. It's also available from Barnes and Noble.)

Booklife says: "Stanton builds chilling suspense with atmospheric details and the town’s legends... Though billed as a supernatural thriller, this could just as easily be considered a horror novel, and is best read with the lights on... Both horror fans and thriller readers will enjoy this dark, richly imagined exploration of fear and loss."

BookTrib (@booktrib) says: "Stanton’s storytelling makes this a fun read, and the novel on a whole is extremely well written and will keep you glued to the page."

Also: Kings of the Earth is now available in seventeen libraries in northern Michigan and the Upper Peninsula! It's also available at the Los Angeles County Library (via BiblioBoard), Burbank Library, Cuyahoga County Public Library and Columbus Metropolitan Library (my hometown!)

(Thanks to Robbie for the photo!)